Only %1 left
As low as $4,739.00
Add to Wish List Add to Compare
Share with a Friend
Skip to the end of the images gallery 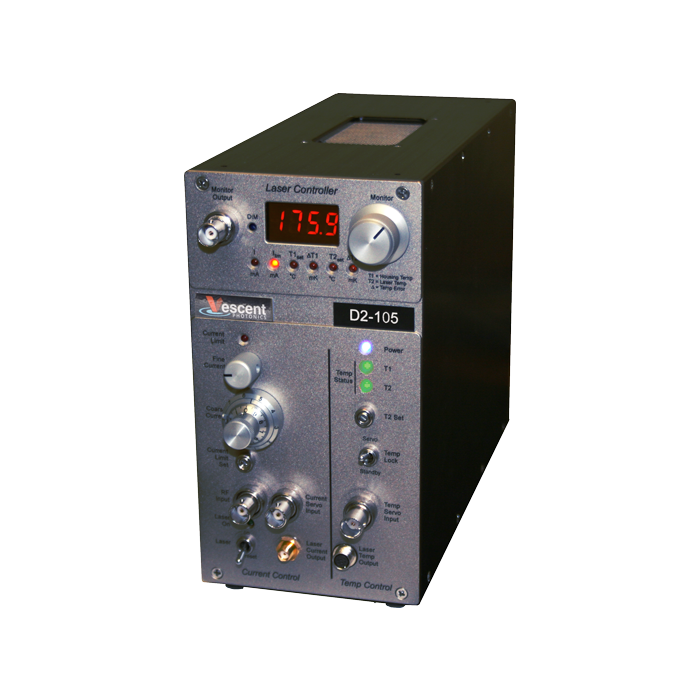 Skip to the beginning of the images gallery
Details

The D2-105 is a precision diode laser current source, based on the Libbrecht-Hall* circuit. With a current noise density <100 pA/√Hz, the D2-105 has lower noise than any other commercially available laser controller. This ultra-low current noise is ideally suited for precision spectroscopy and metrology applications. Furthermore, two-stages of temperature control provide sub-mK stability, ensuring long-term frequency stability.

A front panel current servo BNC input enables high-speed (>10 MHz) servo control of the laser frequency. Additionally, extremely high speed modulation is enabled by a front panel RF port, which is connected directly to the laser current output SMA. This enables the user to directly write sidebands onto the laser via injection current, which can save the use of expensive AOMs and EOMs. To keep 60 Hz harmonics off the output current, the D2-105 is powered with either the linear D2-005 power supply or user-provided power via a breakout board (D2-001).

The D2-105 features two independent PID loop filters for controlling the temperature of your diode laser. The range of parameters for one of these loops is expanded to make it especially easy to temperature control low thermal mass lasers such as the Photodigm TOSA.  It is possible to have the other loop modified to control fast loops also.  Ask for the -FL option.

See a sample of work done with the D2-105 Laser Controller.

Related Products
Check items to add to the cart or