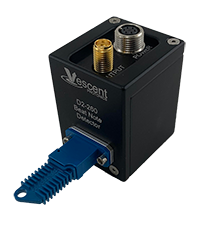 In experimental atomic physics, saturated absorption spectroscopy or Doppler-free spectroscopy is a set-up that enables the precise determination of the transition frequency of an atom between its ground state and an optically excited state. Vescent manufactures the D2-210 saturated absorption spectroscopy electro-optic module which serves as a primary optical frequency standard based on the Doppler-free hyperfine spectra of various alkali metal vapers making locking to atomic transitions easier and more powerful than ever before. The unit works as a general-purpose frequency discriminator and can be charged with Potassium, Rubidium, or Cesium.

Completely redesigned to maximize performance in a number of laser-locking environments, the D2-210 makes atomic absorption-referenced frequency locks simple. Designed as a general-purpose frequency discriminator, it is compatible with our D2-125 Reconfigurable Servo as well as other feedback loop filters. The D2-210 can be charged with either Potassium, Rubidium, or Cesium. It is magnetically shielded and accepts laser powers from microwatts to over a hundred milliwatts.

The Vescent D2-250 laser heterodyne electro-optic module conveniently overlaps two lasers to produce an optical beat note commonly used as an error signal for fixing the frequency of one laser relative to a second laser. Kinematic adjustment mounts make it easier and faster than ever to co-align both lasers. The use of rotatable waveplates at the inputs and polarizing beam splitters allows adjustment of pick off a percentage for accepting a large range of powers.

The Vescent D2-260 beat note detector converts the optical beat note captured by the D2-250 heterodyne module to an electrical signal in the microwave domain. This error signal is processed by the D2-135 Offset Phase Lock Servo which, by way of feedback control to the slave laser, establishes a true phase lock between the master and slave lasers. The Vescent Photonics D2-260 high-speed detector has a full 9 GHz bandwidth for capturing beat notes between lasers of different frequencies. In combination with our other modules, a true phase lock between a pair of lasers, with a user-defined, high-precision frequency offset, can be established.

The Vescent D2-120 Fiber-Coupling Port is designed to facilitate coupling of a laser beam into either a single or multimode optical fiber. This module incorporates a 35 dB optical isolator, prior to the fiber facet, to reduce optical feedback. An FC fiber receptacle is provided with an aspheric AR-coated condensing lens and six degrees of freedom for alignment optimization: 3 linear (x, y, z), 2 angular (azimuth, elevation), and 1 rotational (for PM fibers).

The D2-130 optical isolator module contains a 30 dB isolator and 1/2-waveplate in a rugged and compact package. The D2-130 can be used whenever extra isolation is desired, such as added isolation prior to fiber coupling.